TA Global Bhd CEO Tiah Joo Kim is excited to discuss ALIX Residences with us as we settle down in the show unit of the developer’s latest project.

“This project is close to my heart because the concept is a little bit like me … bold, edgy and different,” he says.

ALIX Residences will be previewed on July 12. Occupying a 4.55-acre freehold parcel, the RM510 million condominium project is located off Jalan Dutamas Raya in Dutamas, which is close to Mont’Kiara. It will comprise 364 units in two towers with built-ups from 1,012 to 6,544 sq ft. Tower A will be 35 storeys and Tower B, 22 storeys.

Facilities include a tennis court, sky futsal court, dining alcove, urban farming and an outdoor community gym. Each unit, depending on the size, will have two to four parking bays. The maintenance fee is estimated at 38 sen psf.

Inspired by the word elixir, the name ALIX stands for a living expression, a modern alchemy that gives life and energy, infusing everything around it with a sophisticated edge. It connotes affluence, lifestyle, innovation and luxury.

Tiah believes the potential residents would be sophisticated, well-educated and well-travelled. “They would have a strong sense of identity. They know their likes and dislikes and they don’t necessarily follow other people or trends.”

His philosophy in life is to be real and transparent, to be oneself and not to be ashamed of it. “I want to be myself and I always thought it is very important to stay true to myself and be authentic.”

This is the concept of ALIX, which is about being original and authentic, he says, adding that the name was chosen also because it is gender neutral.

“You can be a guy or a girl. You can be different. You can be bold. You don’t necessarily need to conform to a stereotype. This is the spirit of ALIX and we want to carry it forward in everything that we do in the project,” he says.

Hence, its tag line is “Brazenly Authentic”. The spirit and tag line will be reflected in all the decisions that are made about the project, says Tiah. “The interior design will be very bold and different. It is not mainstream and people will not expect it to be.”

The developer is targeting professionals, young families and upgraders. “We are targeting people who are in their 30s to 40s or even their 50s. We also expect more homeowners than investors because this is a sought-after location and there are a lot of international schools [in the area],” says Tiah.

Within walking distance is the Lycée Français de Kuala Lumpur, a non-profit French school. Directly opposite ALIX is a piece of land on which a private school is slated to be built.

In terms of pricing, he says it is competitive. “We are confident [that we can sell]. But having said that, I understand what the task ahead is. It is not going to be a walk in the park.”

He says the developer is targeting completion by the third quarter of 2023.

The take-up rate, Tiah says, will be slower. “I think buyers are not in a rush to buy now. It is more calculated and they need to understand the full story.

“They need to believe in the location and the product that they are getting. People who are really interested in buying need to delve into the details of what we will provide for them. Then they will see that we have a compelling story for them.”

According to property experts, the average selling price for condominiums in Dutamas is RM600 to RM750 psf. They believe there is a demand for high-rises in the area.

“Dutamas is a good location and there are many amenities such as international schools here,” says Metro Homes Sdn Bhd director See Kok Loong.

Chua and See foresee good prospects for the Dutamas area because of its proximity to Mont’Kiara and its prices are slightly lower. However, See says there might be traffic congestion similar to Mont’Kiara’s because of limited accessibility and the many high-rise developments there.

This year, TA Global is also looking to launch a project next to its headquarters in Kuala Lumpur. Temporarily called TA 3 and TA 4, the two-tower development will comprise 242 private residences, 601 serviced apartments and a 548-key hotel.

Tiah says the hotel will have a unique concept, different from the traditional luxury hotels in the country.

“We want this place to be more like a champion of the arts and culture, fashion, music, sustainability and technology,” he says. “For example, we are going to have a performing arts component because we are going to be a champion of the arts. For the culinary arts, instead of running it ourselves, we want to be able to pick and choose the best culinary experts of different types,” he says.

It will still be called a hotel rather than an event space because there are rooms to be let out, he adds.

The developer plans to create its own brand for the hotel, which will be launched in the fourth quarter this year, along with the rest of the development. At the launch, the concept will be explained as well as how it will be run and what will make it different.

“We hope to take this brand international. My father, Datuk Tony Tiah, has already said it is time to focus on launching our own hotel brand as we already own hotels that we manage ourselves. We have been thinking about this for a long time,” says Tiah.

The positioning, branding and target marketfor the local market will be Malaysians. “We feel that will make us stand out because when you visit another country, you want to go where the locals go. We want to make sure the hotel is rich in local culture. The only way to do that is to make sure we champion all the things I mentioned earlier locally,” he adds.

And when this brand is taken international, it will focus on the local culture of each city and not take Malaysian culture there. “It is not going to be Kuala Lumpur everywhere. It will be focused on that particular city’s local culture.”

The shopping mall will not be for sale, says Tiah. “The intention is to sell the office and residential towers. For the mall, we want to control the environment and tenants. There is a lack of a mall in this area that people really look forward to.”

He says that at this point in time, the developer is leaning towards managing the mall itself, “But that does not mean we don’t see value or would not entertain an opportunity to talk to people who can manage it for us”.

Another project — tentatively called Nova Square — is located in Jalan Imbi. The 2.68 billion three-tower development will have 1,838 serviced apartments, with built-ups of 582 and 1,086 sq ft, and is scheduled to be launched in 2021.

“Since I have come back [from Canada], this is the first project where the exterior is designed by me. We will probably keep one of the three towers,” says Tiah.

In March last year, TA Global officially launched a two-tower residential development named Ativo Suites at Bandar Sri Damansara. It has seen a combined take-up rate of 70% to 80%, which is “quite good and going well”, says Tiah.

The RM550 million development comprises 668 serviced apartments with built-ups from 499 to 1,490 sq ft. The price point, he says, is the highest in the location at almost RM1,000 psf.

He aims to sell out the project by completion in mid-2021. “I think it is encouraging that people are willing to pay that premium for what we provide them.”

Outside of the Klang Valley, the developer has a project in Kluang, Johor. Spanning 95 acres, the RM450 million development will comprise 524 landed properties with a mix of 3-storey terraced houses, semidees and bungalows. It will be TA Global’s maiden project in Johor.

Phase 1 is slated to be launched in early 2020 and the estimated gross development value is RM40 million.

The developer owns and runs hotels in Australia, Canada, Singapore, China and Thailand. According to Tiah, the company is looking to redevelop its hotels in Singapore and Australia.

“In Singapore, we are talking to the architects to see if we can add more rooms. We will be doing the same to our hotel in Sydney. That is a heritage building, so we are going to see how we can build additional rooms on the top,” he says.

In Canada, the company is looking for new sites. “There are a lot of deals now because China has retreated a bit. We potentially see a lot of opportunities coming up but we have not found the right one yet.”

He adds that TA Global is on the lookout for the right opportunities for assets, especially in Australia and Canada. Seoul in South Korea and Tokyo, Japan, are also on its radar screen.

For property development, Tiah says the focus will remain on Canada, Australia and Malaysia because “it is a very local business”.

“If you go to another country, you are going to get burned because you are not familiar with the market and how things work legally and you do not have local contacts. It is better to play in your own backyard, where you are comfortable,” he says.

At the moment, TA Global has no plans to expand to other states in Malaysia. “At this time, we are quite busy in launching ALIX Residences and later on TA 3 and TA 4. Then, we have Nova Square coming up. We do not want to overstretch ourselves,” says Tiah.

“We also do not want to risk having to leverage and borrow too much because the market is not really good right now. We are happy with what we have on our plate,” he says.

The challenge right now is the pace of sales in the market, he adds. “Everyone loves our products. They are just concerned about whether they can get the financing and whether this is the right time to buy because the market might go down.

It is important to understand the environment now, he says, and be more prudent in terms of financing and planning for a project.

“It is not going to be a sprint. It is a marathon and you have got to pace yourself accordingly. You have to be a little more conservative, as we have always been with our projections,” he says.

Going forward, Tiah says the company will try to launch all its projects.

“Our stock is not like a tax stock or anything like that, where there is so much potential growth. It is going to be stable and conservative. When our projects are actually completed, or when we sell more than we take and accumulate more, then we will see the profit coming in,” he says. 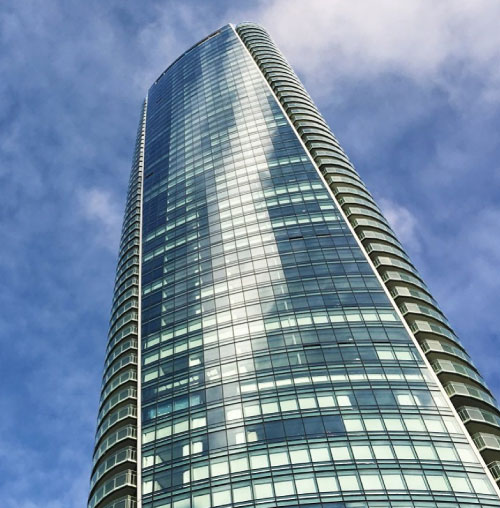